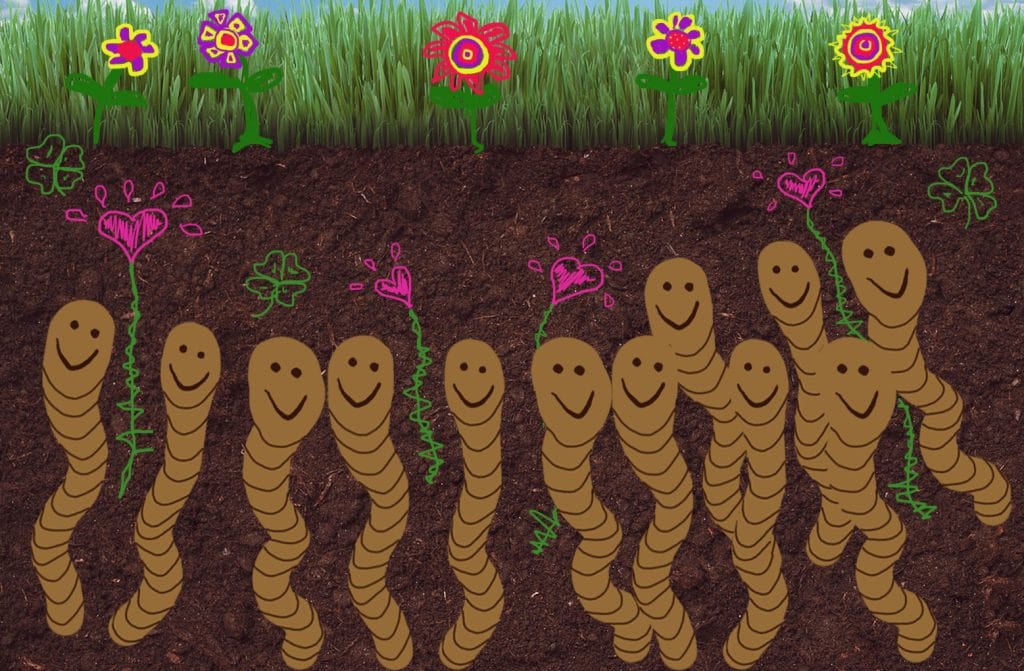 If you’re not sure you can be excited about worms in your garden, I’m asking you to be curious and open-minded as you read this blog post. Stay with me and you will grow a new appreciation for worms. Not only that, you’ll have the knowledge to take your gardening to a new level.

You may already know that worms are good for gardens. They are, in fact, really, really good for your garden. Earthworms:

All of which bring these benefits:
• more nutrients for your veggies and other plants
• greater access to water and oxygen for your plants
• improved soil drainage means less disease/fungus/rot in your plants

“Any environment, any single life is in a continuous state of change. This is just more obvious when you pay attention to earthworms. Their work may seem unspectacular at first. They don’t chirp or sing, they don’t gallop or soar, they don’t hunt or make tools or write books. But they do something just as powerful: they consume, they transform, they change the earth.” – Amy Stewart, Author, The Earth Moved: On the Remarkable Achievements of Earthworms

Worms tunnel through the earth and in doing so they naturally aerate the soil. What that does is create little paths for water and air to flow. It also creates room for your plant’s root systems to grow. Roots can have a difficult time trying to grow in compacted soil. So by loosening the soil, worms invite plant roots to flourish and feed. Those roots can access more moisture and oxygen because the soil has been loosened by the worm’s tunneling.

When the season is over and those plants and their roots die off, the worms and bacteria feed on them and create more nourishment for the next round of roots. Hint-hint, it’s okay to leave the roots of some plants (non-allelopathic plants) in the ground after they’re “done”.

Worms feast upon organic matter like leaves and roots of dead plants, fruit and veggie matter left on the ground, basically anything that’s decomposing. I have a small worm farm and have found that my worms love mangoes. I mean, they love the mango skins and the seeds. But in a garden scenario, they eat anything that is decomposing. Worms don’t chew. They have a gizzard that grinds up their food by smashing it with tiny stone fragments.

Let’s pause here and get clear on a common myth. Some people promote the idea that worms eat eggshells. They do but there are rules. First, the worm body is squishy and soft. Worms get cut up if they have to crawl around, over and through broken eggshells. But, worms need some grit in order to push their food through their digestive system. If you have a worm farm or start a worm farm, crush eggshells into a fine powder before you add them to the worm bed. I collect washed, dried and crushed eggshells in a jar and when the jar is half full I pulverize them in a coffee grinder. It kind of stinks, but I love my worms.

Back to worm digestion…once the food is ground up in the gizzard it can pass on to the intestines where nutrients are absorbed into the bloodstream. Whatever is left gets excreted through the anus. It’s the wondrous, fabulous Worm Poop!

The term “worm castings” gets thrown about but let there be no mystery, it’s just worm poop. Another term you might encounter, “vermicompost” is the product of composting with worms. It happens when worms eat then poop. That’s the basic explanation. Bacteria and microbes start the decomposition process of organic matter in the soil, things like leaves, flowers, fruits and veggies. It’s like they are preparing these for the worms to eat. Then the worms eat and poop. Voila! Vermicompost is compost because it is the byproduct of the breakdown of organic material, but with worms.

Vermiculture is the practice of worm farming. Worm farming (worm breeding) is easy to do and kind of fun. It also reduces your household food waste because you can feed most food waste to the worms. When you have a worm farm at home, you get to harvest the castings and use them in your garden. You can also prepare worm tea, a liquid fertilizer made of water and worm castings that you use to water your plants.

As you can see, all of this leads to getting worm castings in your garden. Worm poop is a precious thing.

This is serious. I raise worms and harvest the castings. I’ll spread some castings around my plants before a rain or just water them in if we’re in a dry period. And every time, I kid you not, there is an obvious boost in growth in just two days. I can’t guarantee your results, but this is a consistent experience in my yarden. The same thing happens when I w 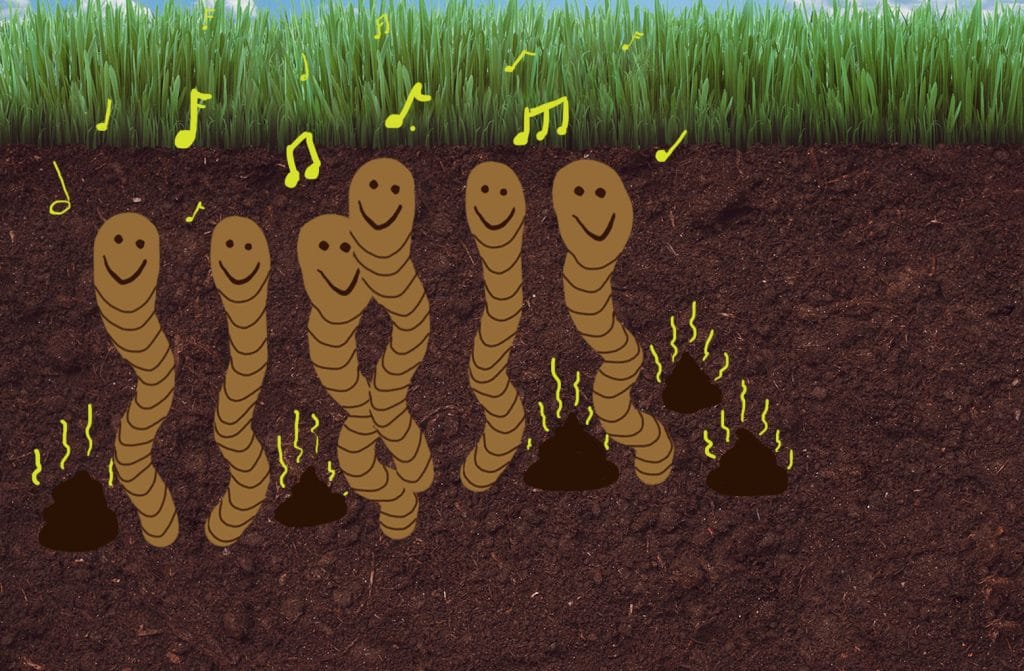 ater them with worm tea. It’s amazing and fun to see!

Worm poop is hyper-loaded with nutrients. It’s a nutrient concentrate. It has all the stuff plants love like nitrogen, carbon, phosphorus, iron, Sulphur and more. Hence, everybody’s favorite line in the song The Worm Squirm – “Our poop is hailed as garden gold”!

Now that you know more about worms and all the good work they do in the world, are you not a True Worm Lover? Ok, maybe you’re not ready to start a worm farm, but you’re definitely ready to get some worm castings at your local garden store and give your garden a treat.

Thank you for not tilling your soil before planting. Please use a garden fork if you need to turn the soil because using a spade can cause a violent end to our lives. Better yet, use no-dig gardening methods, it’s better for the soil and saves our little worm lives. Thank you, We Love You.

I’d love to know what you learned or how you are inspired by this article. Drop a comment and share, thank you!