A Book Review for Gardeners

They’re not gross at all! Okay, maybe still a little gross when there’s a big clump of them; but honestly, the more you learn about these amazing creatures, the more you’ll be in awe of what they do.  Author Amy Stewart does a remarkable job of showing us the myriad ways earthworms are incredible in her book “The Earth Moved – On the Remarkable Achievements of Earthworms”. It’s a delightful read, often humorous and offers continuous surprises.

I’ve been raising worms for about four years. I affectionately call them “my little wormies” and I get such joy when I feed them. They love mangoes and mushrooms and bits of leafy greens (as shown above). The wormies seem, I don’t know…cute. They squirm, they eat, they’re all over each other. It makes them seem carefree and likeable. I had no idea they were such high achievers.

“The Earth Moved” opened my eyes to the industrious world of worms. The book starts with some background on the earliest research and demystification of worm life conducted by Sir Charles Darwin. Whether or not you’re a Darwin fan, you’ll gain new respect when you learn what he went through to understand the life of worms. He’d become ill from a long voyage and went to recuperate at his uncle’s country home. It was his uncle who suspected that over a period of years, earthworms had buried some bricks and cinders under a few inches of soil. It was 1837 when a young Darwin began his serious study of worms. At that time, scientists weren’t thinking twice about worms, considering them less than worthy of their attention.

In those days, the origin of the top layers of soil was a mystery. It was referred to a “vegetable mould”. It was Darwin who credited earthworms for making the rich top layers of soil. That wasn’t a popular view, nor was it adopted at the time. Worms were thought of then as garden pests and dumb creatures with pointless lives.

It would take another 50 years before Darwin would publish the findings of his years of painstaking research on worms. His then incredible claims like, “an acre of garden soil could contain over fifty-thousand earthworms and yield eighteen tons of casting per year”, are now known to be underestimations. He claimed earthworms were responsible for the creation and constant regeneration of soil through their constant sifting, digesting and excreting. Turns out he was right.

Worms in the forest? 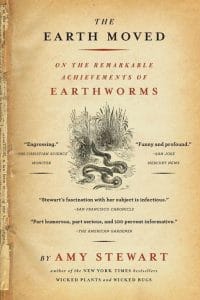 The entire book is not about Darwin, that’s just for context. It’s fascinating all the same, to learn how he developed and conducted studies to observe their behavior and intelligence. Author Amy Stewart takes us on a tour as she observes worms at work in her compost bins and garden. Her curiosity and humor are contagious and at times, invites the reader to mentally trail off in wonder.

Worms till, regenerate and nutrify the Earth. That’s what they do. Much of the book is devoted to these accomplishments.

And there is a very interesting, unexpected, chapter on how worms are pests in the forest. I mean they’re actual bad guys of the forest.  Who knew?

“The Earth Moved” is an easy, fun and fascinating read that will lead you to a new appreciation for earthworms and the soil beneath your feet. Gardeners and earth science teachers will find this book particularly valuable and inspiring. It’s loaded with fascinating facts and stories.

I’m not receiving any financial benefit from promoting this book. I read it and wanted to share because it’s such a unique and wonderful book.

Order the book from Barnes & Noble and watch a fun lyric video of my song The Worm Squirm.

Thanks for reading. Go kiss a worm! ew